an outback project from Jon Rose

I LOVED IT! Having been involved with multi-disciplinary installations, soundscapes and improvised music for most of my life I have had the pleasure of seeing and hearing many very different works engaging with found objects. Wreck established itself as a quintessential experience for me.
Lieven Bertels (Director, Sydney Festival)

What I really like about WRECK is the everchanging character of the relationship between the object (the wreck), the live performed and the pre-recorded sounds and the moving images. Between powerful acoustic attack and subtle musical discoveries of what is possible. Though overwhelming in its surprising character there is enough space for the spectator to reflect, to imagine - and to get lost between what we hear and what we see: and never be completely sure about it!
Heiner Goebbels (Composer, Music/Theatre Director)

Jon Rose's WRECK is a remarkable feat of musicianship and imagination. Towed in from the remote deserts of New South Wales, Rose's rusted-over car wreck is a powerful presence in the performance space - an iconic, decaying structure that has literally bridged the divide between city and country Australia. Resurrected by the astounding musicianship of Rose and his collaborators, the wreck rattles, pulses, screams, hums, and shudders hypnotically. It is a totally engaging and strangely moving experience to see this ghost of the outback re-animated as a living, sonic entity. This is the history, present and future of our environment, of the complicated relationship between humans and landscape, played out at an electrifying scale.
Jeff Khan (Director, The Performance Space, Sydney)

The other night I was privileged to experience WRECK at Carriageworks presented by Performance Space and the Festival of Sydney. It was amongst the most impressive of Rose's complex and musically rich events to date. The use of projected car wrecks collected from around White Cliffs in Western NSW provided a powerful visual backdrop for what was a masterful musical improvisation. The Performance built from brilliantly controlled bowing and percussion using the car body as an electronic and material sounding board to a crescendo of sound that created the atmospheric impression of cars starting up, reving and possibly crashing. Ballard would have loved it! This is a work that will appeal to a diverse audience anywhere in Australia. I can strongly recommend future events making this a key part of their programme.
Tony Bond (Head Curator international art, Assistant Director, Art Gallery NSW) 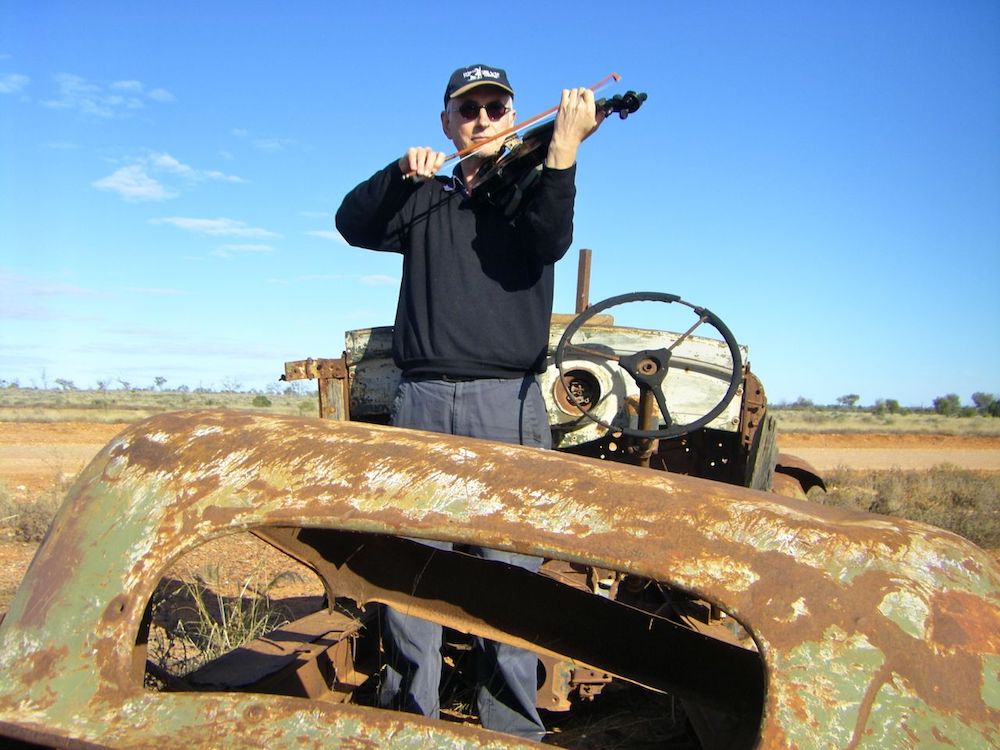 Wreck has become part of the cultural life of remote indigenous communities such as Lombadina, Djarindjin, and Warmun, in the Kimberley region of Western Australia. Hear the project there now! 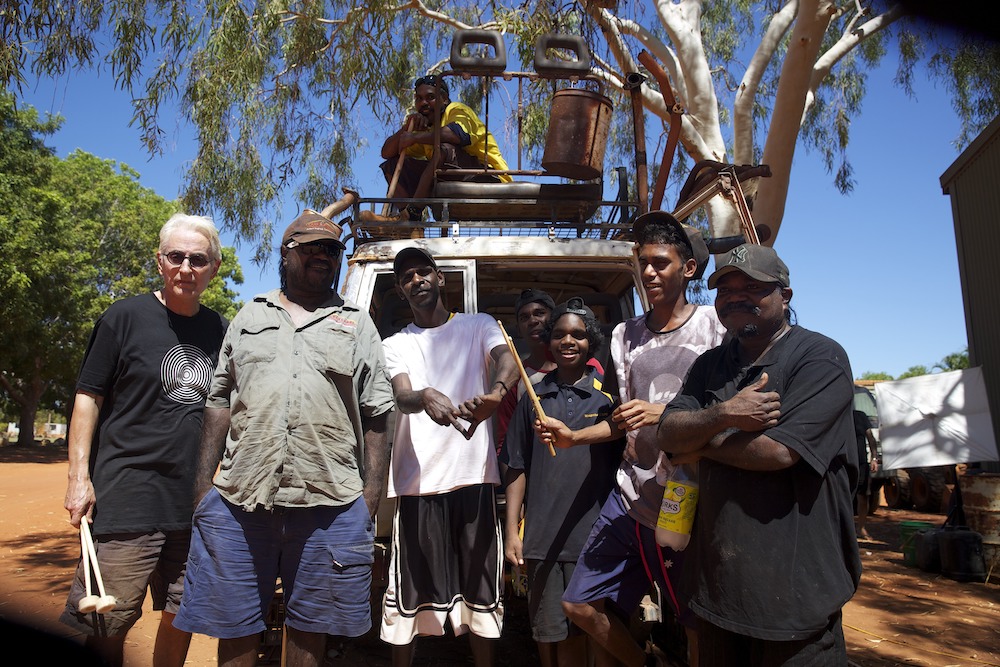 Wreck was originally part of the Sound Circus 2012, a project in which composer/artist Jon Rose led a band of musicians and sound artists to Corner Country - the outback where NSW, Queensland, and South Australia meet. Sound Circus was an expedition of self-education and sonic discovery, as well as a contemporary take on the notion of singing up the neglected parts of our continent.

Wreck is one of the main sculptural features of the outback, the rusting history of Australian transportation, turning the very colour of the outback itself - imbedded, iconic, stranded, entropic, defeated - returning to the chemical parts from which it was made.

Wrecks surround the mining town of White Cliffs, NSW. We have brought one of these back to Sydney to be installed, turned into a substantial musical instrument, and sonified in performance. This 1967 Holden Utility was once owned by Clair Innes, she could be seen in the 1970s driving it around Smiths Hill, White Cliffs minus one of the car doors - as you see it here at Carriage works. How did it lose its door? According to locals, it only ever had one door.

Wreck is the origin of the sound sources and also the amplifier of its emotive rattles, buzzes, hums, furious metallic rhythms, and disturbing shakes. Wreck sings up the quiet fragile creaks of old age to rock 'n roll levels of destructive vibration. WRECK situates itself somewhere between a DB drag race, an exercise in entropy, a celebration of the outback, and the reciprocity between urban and rural life.

Wreck is a budget multi-media experience incorporating images of a hundred of the most beautiful outback car wrecks and a team of musicians/sound artists using the Wreck as both icon, instrument, intensifier, and vibrating transmitter. A lone violinist provides commentary on the proceedings. Bring your earplugs and let the waves of sonic rust massage your solar plexus. 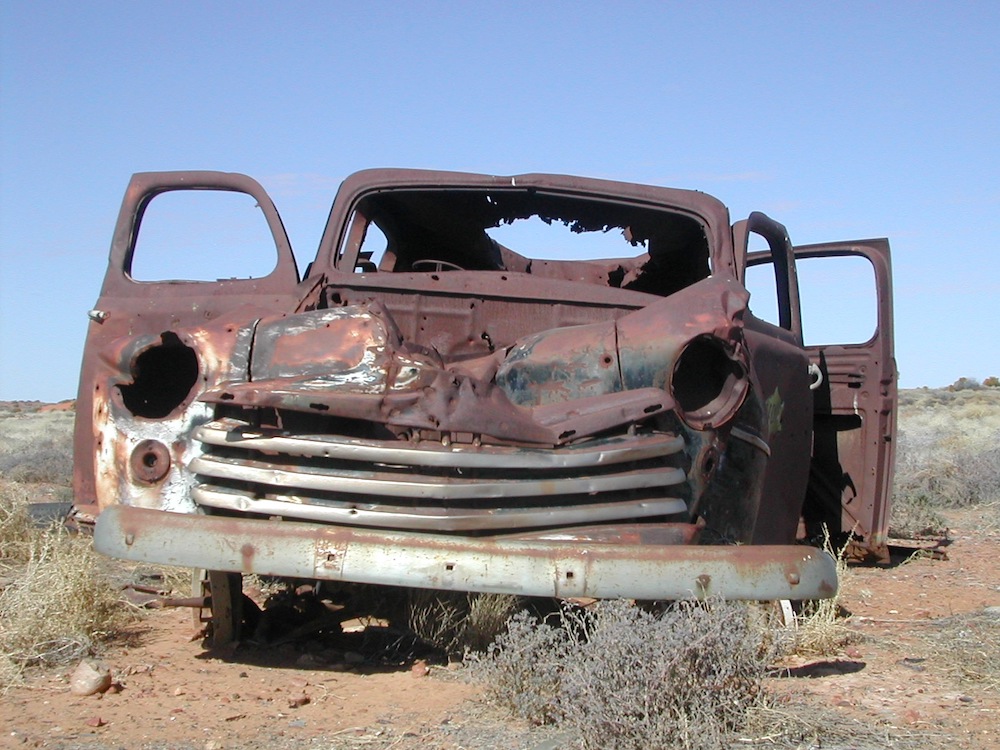 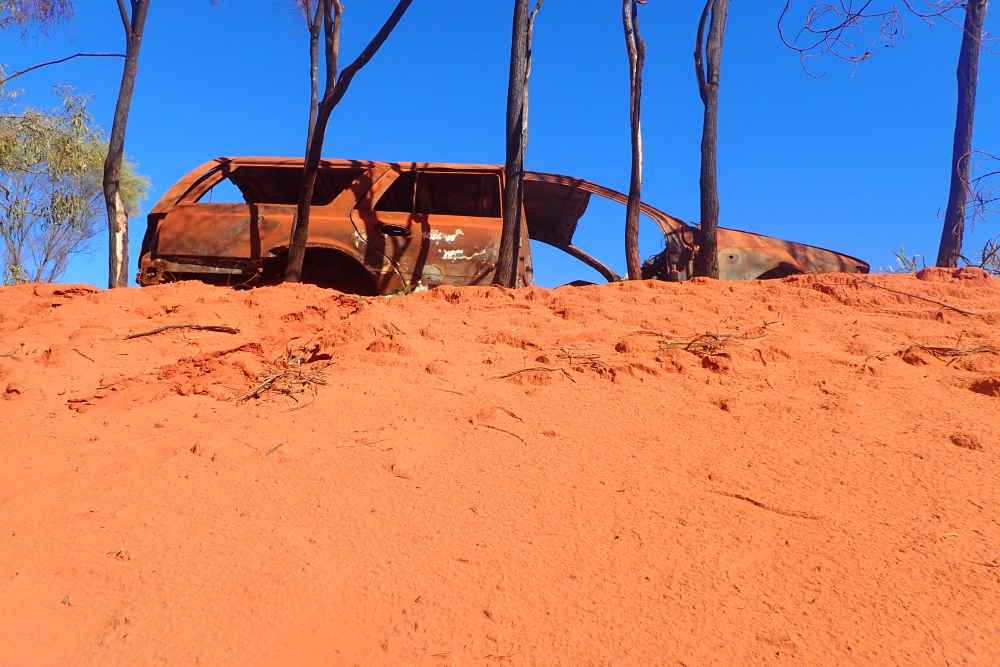 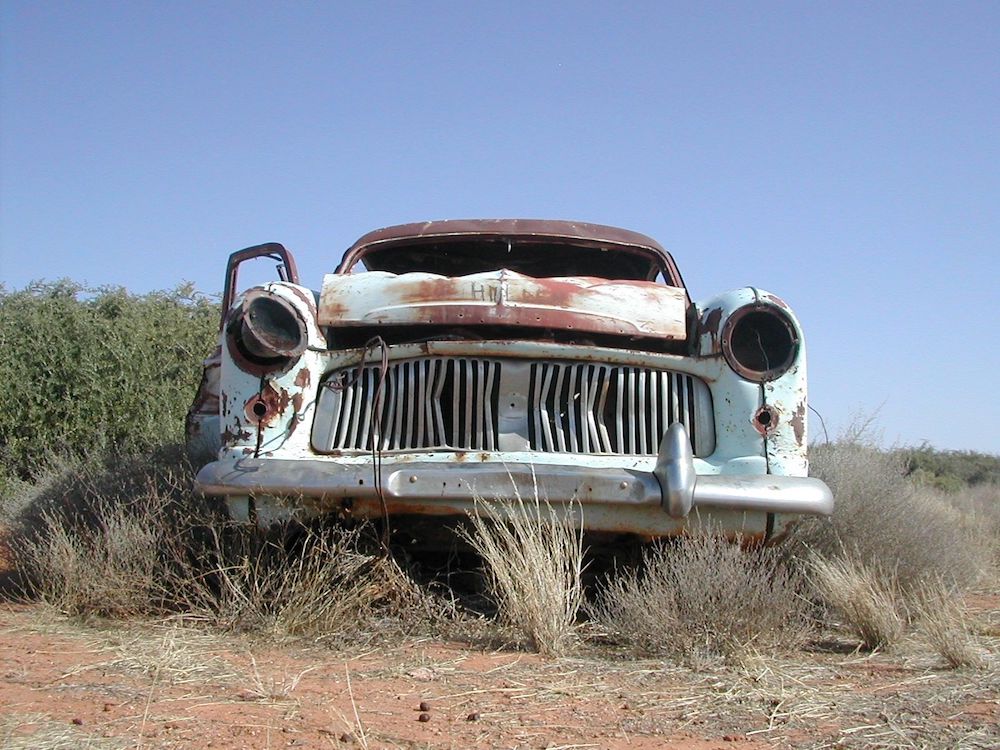 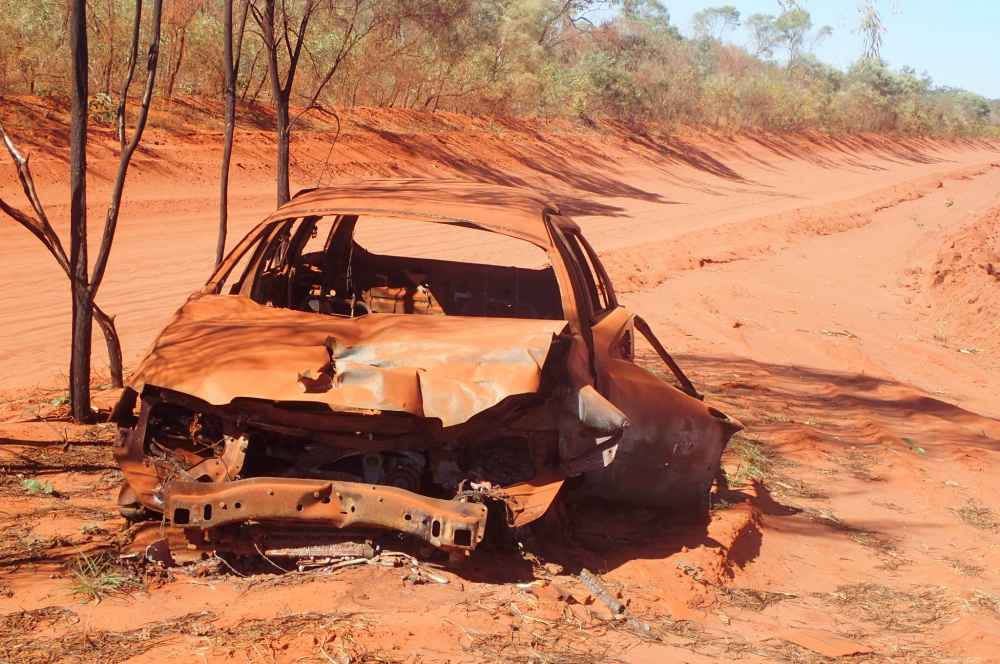 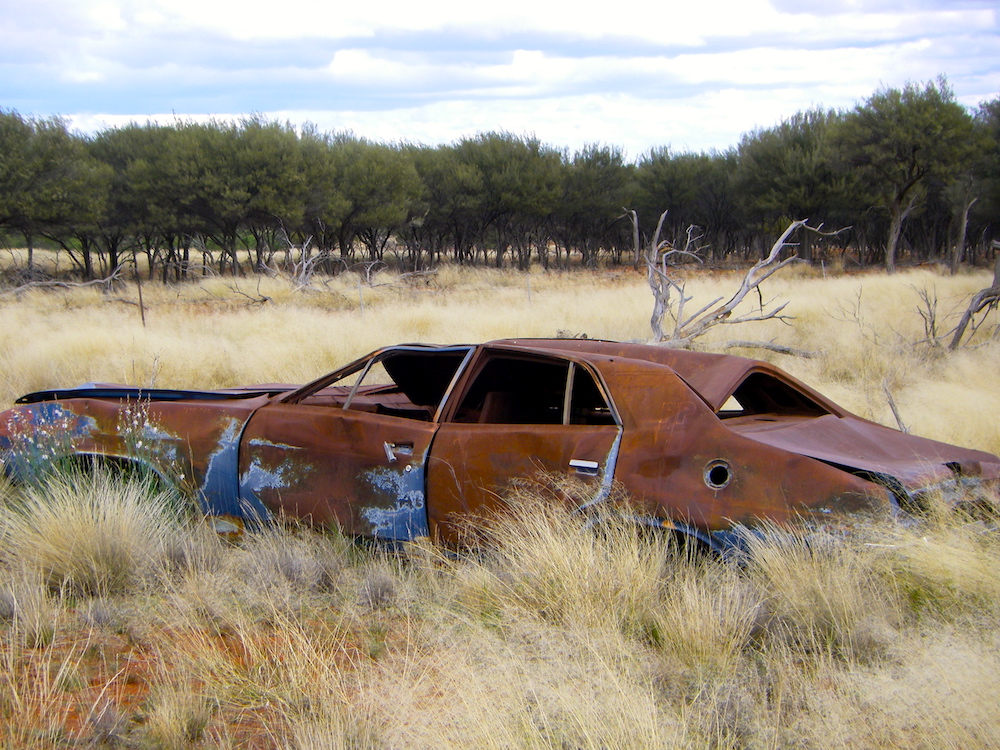 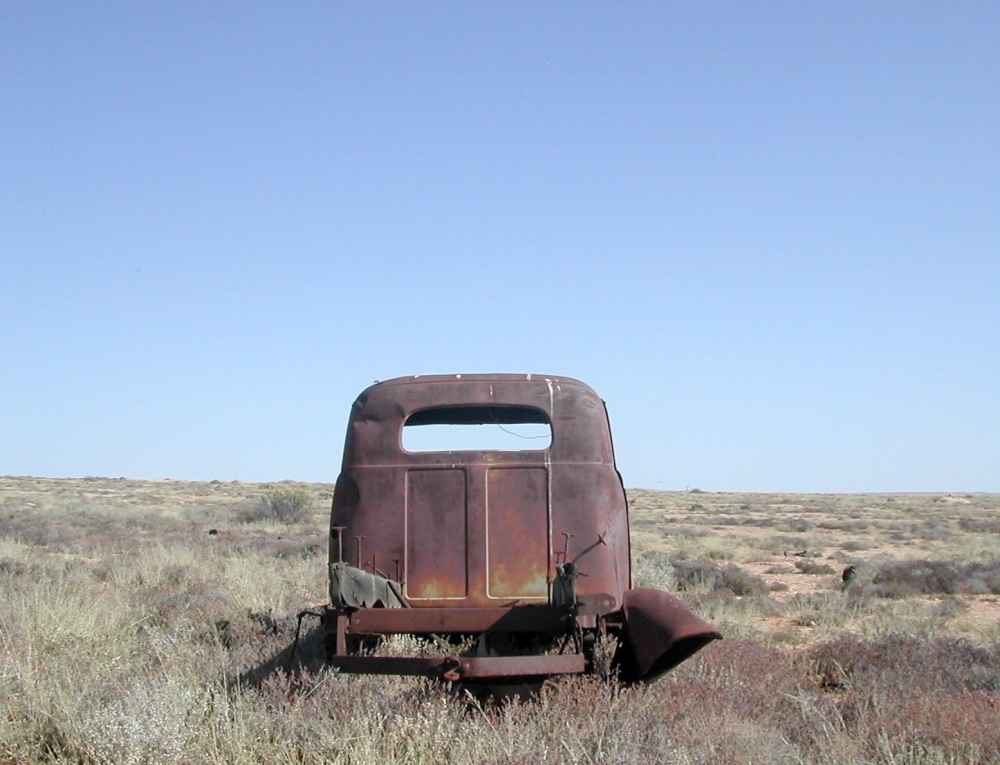 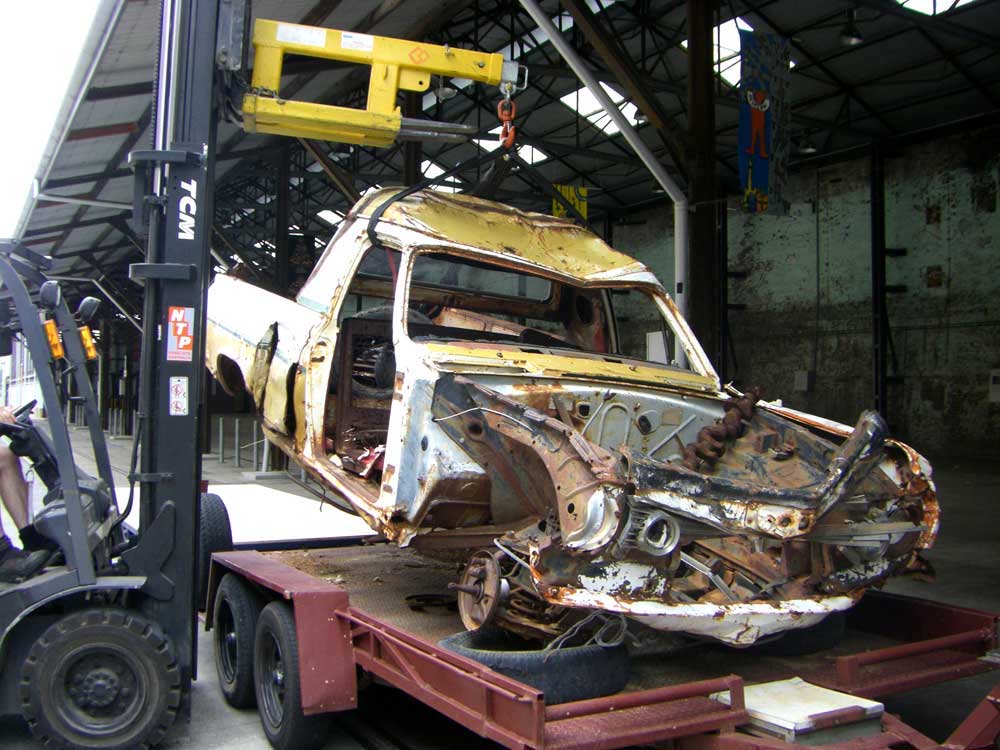 the White Cliffs Wreck being unloaded at Carriageworks, Sydney 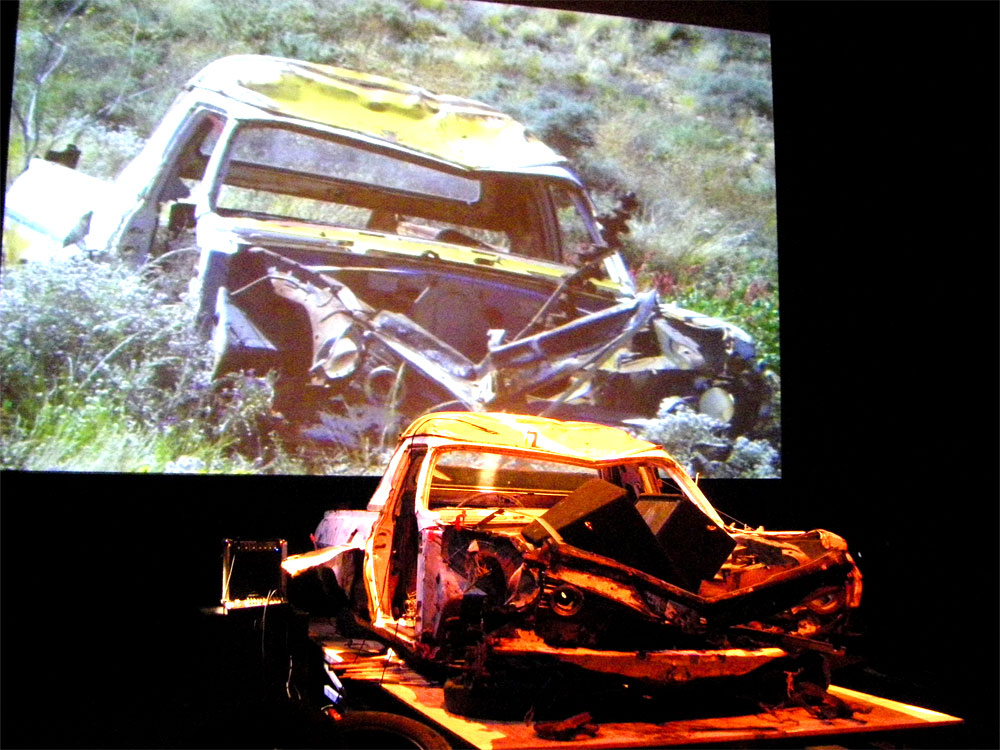 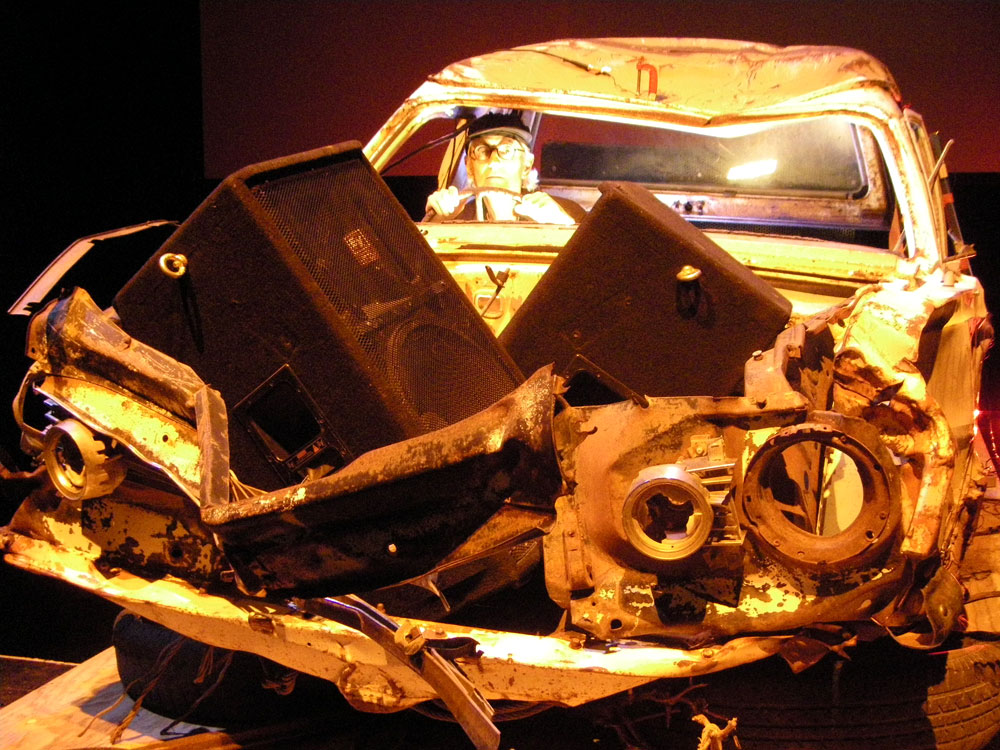 Jon Rose behind the wheel of the White Cliffs Wreck, Sydney 2013