Turn on/off the embedded sound - The Violano in experimental mode, interfered with by Jon Rose in 1999.

The MIDIfication and adaptation of an historical mechanical violin

A short description of The Violano Virtuoso

On the first page of the Violano Virtuoso manual it states that 3 good men are necessary to get the machine off the delivery wagon... so we are talking a serious lump of piano roll type instrument here. The instrument was patented on June 4th 1912 by the Mills Novelty Company of Chicago. Other player piano/violin combinations followed with up to 3 violins available. The piano has 44 notes and the violin has 64 notes - an octave of notes available on each string (hence the possibilities of 4 part independent counterpoint). Small electric powered rollers (self rosinating!) and a chromatic set of metal 'fingers' play the 4 violin strings and the piano section is played by regular hammers using a standard player piano action. The fingers and hammers are activated by electromagnets. The violin comes with an optional and very wild vibrato (in which the whole violin wobbles), plus a mute to vary volume. The violin (as in all Violanos) was produced by the Mills company in their own workshops and produces a full tone; the instrument has no difficulty sounding 1/2 note double stops at ragtime tempi (whether it can cope with much faster tempi remains to be seen). The staccato coil can cause the bows to leave the string a fraction of a second before the 'fingers'... so some phrasing possibilities then! The violin stays in tune by a sophisticated array of tuning arms and weights instead of the usual scroll and pegs.

OK. So why do you want to go to all the trouble of getting an old mechanical 'Juke Box' of the early 1900's to be playable from a computer? Surely it is easier to get a computer just to play MIDI controlled modules or samplers... and leave it at that?

1. My work as composer and violinist for 30 years now has been to explore every real and imaginary aspect of the violin. I first came across this particular 'Violano-Virtuoso' some 15 years ago when it was still in the Master Touch Museum in Sydney (it had recently been restored to full original working order by Mr. Barkley Wright). I made a recording then for a radio programme that I was working on for the ABC. I was struck by the fantastic mechanism that had been built for the violin (player pianos I already knew about). That experience inspired me to find a contemporary music reality for this incredible instrument. It's taken a while but...

2. No sampler comes anywhere near the beauty, subtlety, articulation, and cumulative effect of a live acoustic instrument. There is a lot of acoustic phenomena, such as sub-tones, which happens with real instruments that is just not possible with a 'virtual' representation... put your ears close to the Violano and you'll hear what I'm talking about.

3. Computerisation of the Violano will make almost any style or piece of music from history available without the huge expense of getting new Rolls cut.

4. The violin inside the Violano is set up so it is possible to get a computer to play the instrument in independent 4 part counterpoint... an impossibility on the traditional violin. This is a new paradigm in the history of the violin.

5. I believe that with care and attention given to the tuning of the violin and the piano (experiments in Just intonation, quarter tone, 19 tone, etc) this violin/piano combination will make an acoustic sound never heard before. (Experimentation with non standard strings on the violano could yield quite radical results. I have already worked out many interesting scordatura tunings on the regular violin, using all D strings for example).

6. A rare observation by Tchaikovsky noted that the piano and violin have little in common timbre wise. Having suffered the wretched western canon of piano/violin sonatas from Mozart to Stravinsky (and onwards), I agree with him thoroughly! Almost anything goes with a violin except the modern grand piano (and I do mean anything). The Violano Virtuoso bound these two icons of western music together for use in the popular music of the early 20th century... the unnatural couple, the faux pas de deux. Now at the beginning of ththe 21stentury, we are finally ready for that long awaited exorcism between violin and piano.

7. Hopefully the MIDIfication of the Violano will open up some new and extraordinary aural possibilities for other composers in Australia.

Read more on the planning and projection of this (now defunct) Violano project.

Eventually, patience ran out, and along with Martin Riches and Sukandar Kartadinata, I brought the Data Violin into existence to explore the options of a midi-fied mechanised violin. J.R. 2016 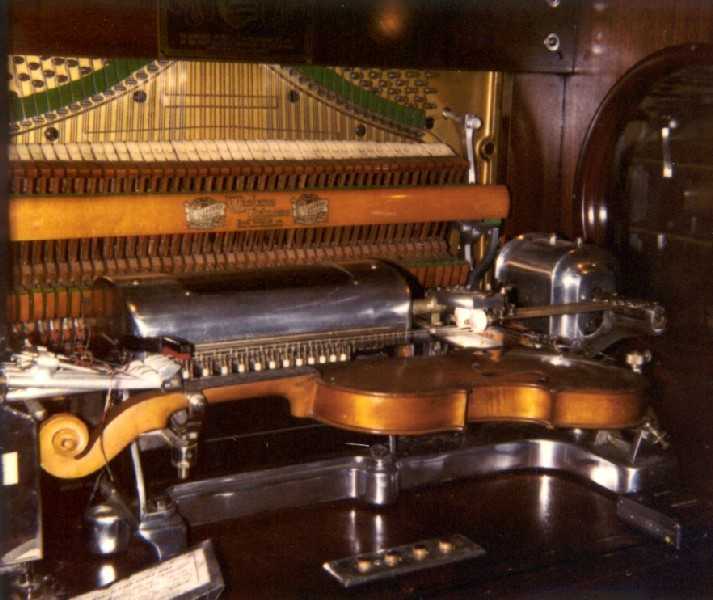 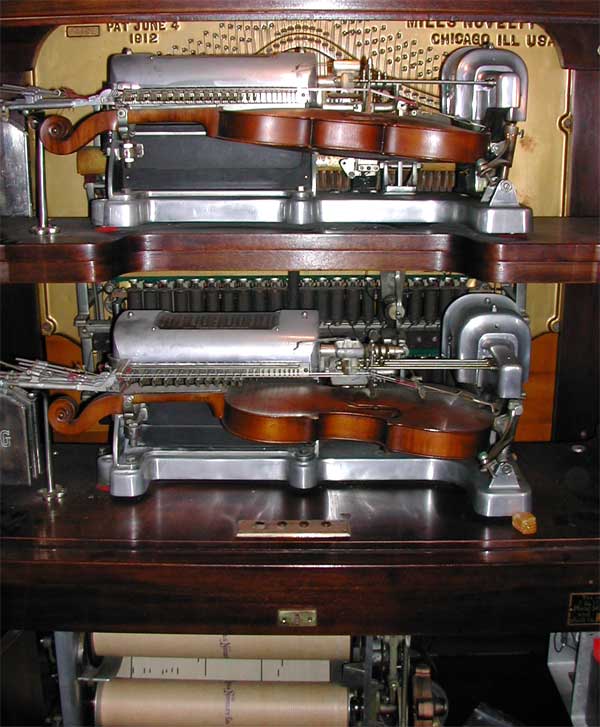 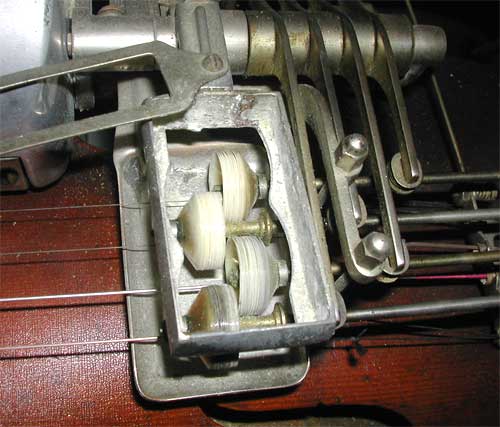 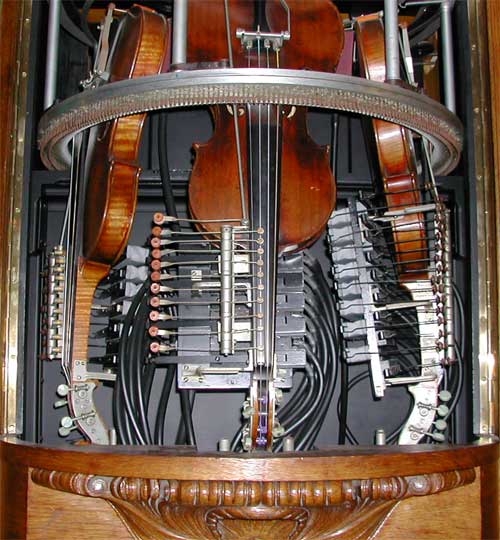 the Hupfeld Phonolist Violina mechanism with circular bow and three violins, the Craig Robson Collection, Sydney, 2005
The collaboration for this project with the powerhouse museum never took place due to the normal bureaucratic proceedures designed to destroy all innovation. The Violano remains locked in a cupboard in a warehouse unheard and unseen by the public. Some years later I met Craig Robson who has a collection of mechanical instruments which includes the De Luxe Violano-Virtuoso (nicknamed the double mills violano) with two violins, the museum also hosts the extraordinary Phonolist.
Aware by then that the Mills company itself had produced a midi interface for the Violano, Craig was interested in hooking such a device up to his own De Luxe Violano in Sydney.
This is not such a straight forward problem to solve due to the reculcitrant nature of antique owners, and we await further developments before new music can again be performed with the Violano.
website by jos berkers