They coax celestial tones from Rabbit-Proof Fence No 2; the Dog Fence, built to stem the migration of dingoes, rattles and hums; at the close, a fence throbs and drones for nine disorientating minutes, before an aeolian splutter of the Dog Fence's last grid echoes the vastness of the delineated continent.
The London Times

Since 1983, in addition to his work on and about the violin, Jon Rose has been bowing and recording the music of Fences worldwide. A wide range of music can be coaxed from these ubiquitous landmarks.

Other fence projects such as MUSIC FROM 4 FENCES (with The Kronos String Quartet), FENCES OF ISRAEL, THE SYDNEY FENCE, THE FINLAND FENCE, THE MEXICO-USA BORDER FENCE, THE WOGARNO FENCE, THE WHITE CLIFFS FENCE, THE EXMOUTH COMMUNITY FENCE, and not forgetting THE FENCE, have also been documented.

The project GREAT FENCES OF AUSTRALIA maps the vast spaces of Australia. Since 2002, violinists Jon Rose and Hollis Taylor have travelled 35,000 kilometres playing and recording the unique sounds of hundreds of fences in every state and territory of the fifth continent, including the well-known 'Dog Fence' and 'Rabbit-Proof Fences'. Along with this video and audio material, the lives and histories of the people who build, look after or use the fences has also been documented. 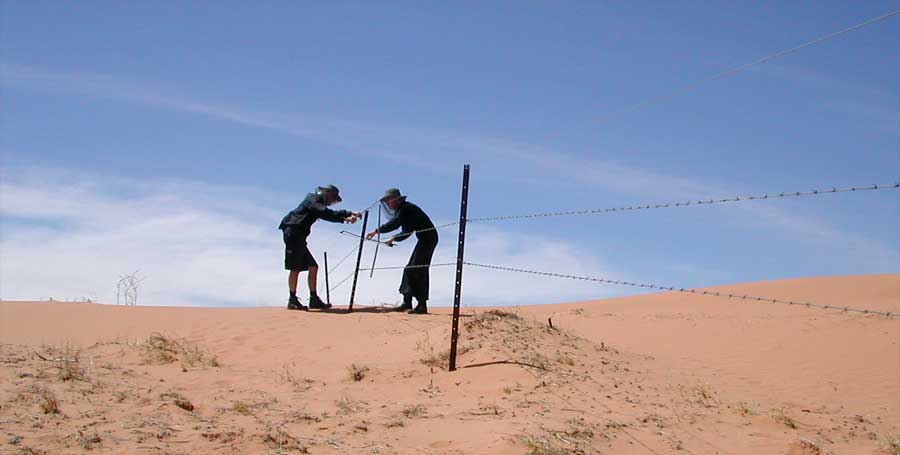 Jon Rose and Hollis Taylor playing a fence on top of a sand dune in the middle of the Strzelecki Desert, armed with bows and obligatory fly veils

The first manifestation of Great Fences was hosted by The Melbourne Festival 2002 under the title BOWING FENCES; over nine thousand people heard sixty performances on the specially constructed fence. Since then, the project has featured in festivals at Mercat des Flores, Barcelona; Museo de Belles Artes, Madrid; Serralves Museum of Contemporary Art, Porto; the ghost town of Malparinka in Sturt National Park; and over twenty-five thousand people witnessed the Fence installation and performances for The Sydney Festival 2004 at The Art Gallery of New South Wales. It 2004, the project was showcased at The Adelaide Festival and also that year, invited to the Aboriginal Community of Nauiyu on the Daly River in the Northern Territory for their Merrepen Arts Festival. After further extensive exploration and documentation of fences in Central Australia, the project was featured in the Darwin Festival. 2005 saw Great Fences installed and performed for a month at The Brussels Museum of Musical Instruments, and by its omnipresence there, radically extending the definition of 'musical instrument'.

In planning is a specially designed Fence based on the principles of Just Intonation and the Fibonacci series. A radiophonic version of the project entitled 'Voices from the Fence' has been commissioned by the ABC, and a CD complete with specimen of rusty barbed wire, has been produced by Dynamo House (Melbourne). 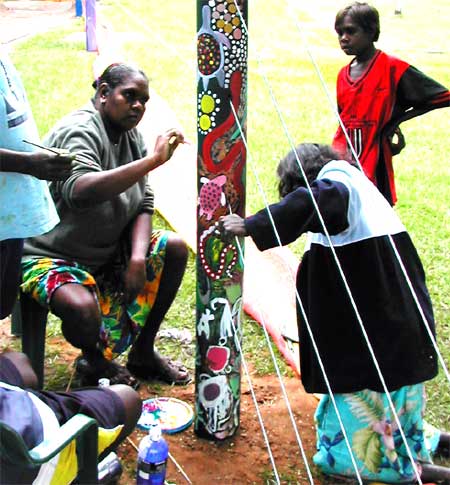 Many people look at fences and see not much; Jon Rose and Hollis Taylor look and see giant musical string instruments covering a continent. The strings are so long that they become the resonators as well as the triggers for the sound. On straight stretches of a simple five-wire fence, the sound travels down the wires for hundreds of meters. The music is ethereal and elemental, incorporating an extended harmonic series (the structure of all sound); the longer the wire, the more harmonics become available. The rhythms of violin bows and drum sticks uncover a fundamental sonic world. The fence music encapsulates the vastness of the place. Music of distance, boundaries and borders. This, however, is not the songlines, or even the white fella's ironic version of it, but the unexpected and elegiac music of the Australian landscape 'sounding' its recent history. Fence construction has inadvertently given us a means of expressing musically, with a direct physical connection, the whole range of intense emotion tied up with the ownership of the land, from the outback to the backyard.

The fence is the perfect metaphor for all kinds of manmade endeavors, disasters, contradictions and hubris. Fences arrived with the end of the hunter-gatherer way of life and the introduction of agriculture. With that came the development of the Abrahamic religions, the European philosophical tradition, the Cartesian mind-body split, an 'Enlightenment' that confirmed duality as 'can do'; the separation of mind and matter and the hierarchy of mind over matter. According to some philosophers, our present demise (or overwhelming global triumph!) is due to the domination of the grasping, language based left hemisphere of the brain over the holistic right hemisphere. Why do we have a divided brain anyway? We find ourselves now in a situation, maybe too late, where we are trying to reconnect with an animate planet full of beings, whether fauna or flora, that we have treated as 'not us' and trashed to the edge of extinction. 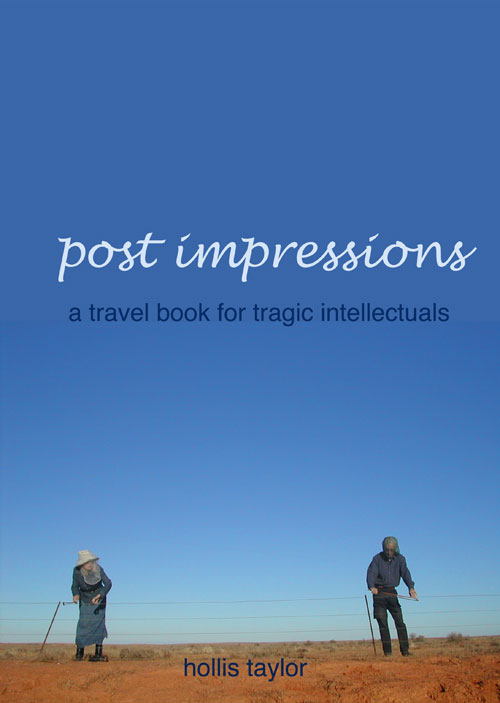 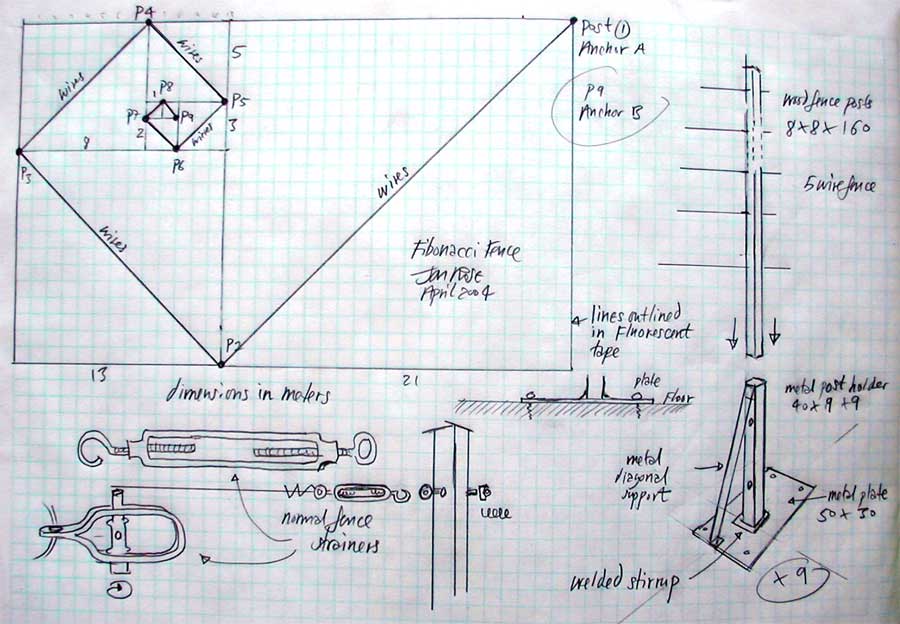 A drawing for the
Fibonacci Fence
designed on principles of just intonation
and the Fibonacci series,
proposed for Western Australia
when I can find a sponsor! 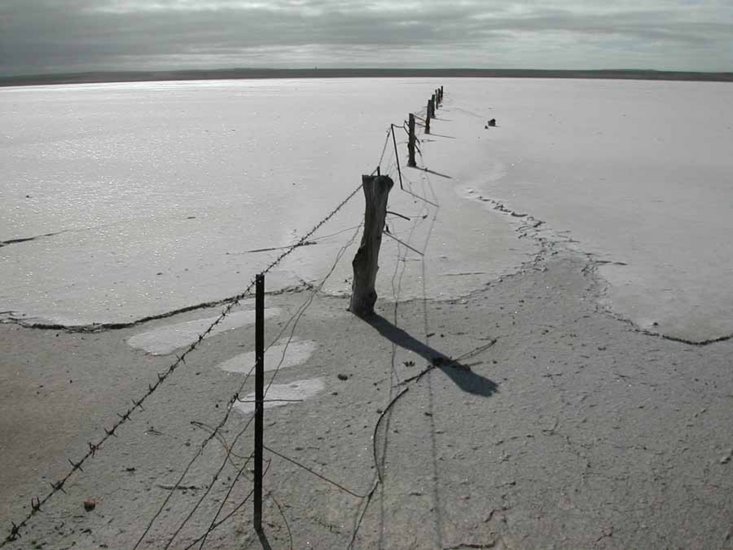 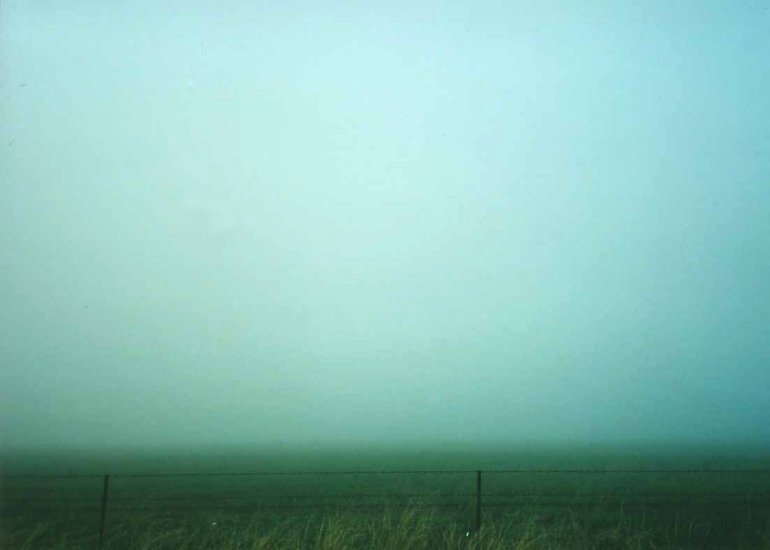 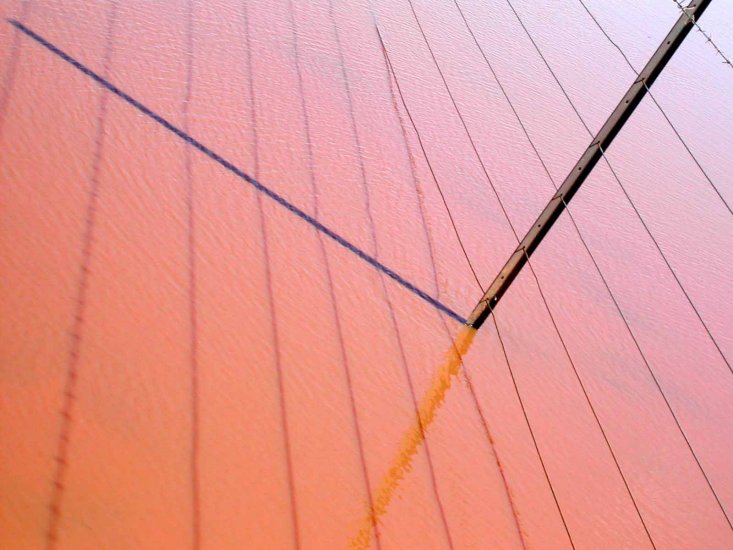 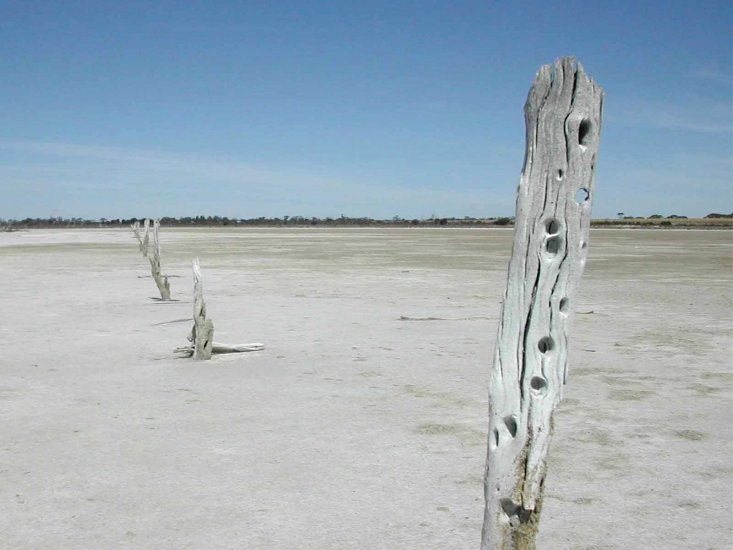