Turn on/off the embedded sound - The sound embedded in this page comes the tenor violin built by Harry Vatiliotis of Sydney.

So what exactly is a tenor violin then? Like a regular violin but gone menopausal?

Very funny and also very wrong. First of all, there is the problem of nomenclature. Also known as the small bass violin but not to be confused with the viola da gamba. A tenor violin can mean many things depending on which century our violinist happens to be living in.

A true political survivor then? And I thought you were going to start raving about how once upon a time music had more complexity and middle in it, but along came those Viennese types like Haydn and Mozart and reduced the Teutonic club sandwich to just four parts. Nicht wahr?

Correct. Before they started to churn out all those string quartets, the dream meal ticket consisted of five, six or even eight parts. In earlier times four parts would have given the impression of a budget burger.

What happened to the viola while this was going on? An identity crisis? Dietary concerns?

You could say so. Violin makers kept pointing at the instrument and saying derogatory things about its size - size has always mattered in the violin world. Behind every well-proportioned viola is the suspicion of anorexia. The viola was constantly under attack for not being big enough to handle the middle vibrations. Stradivarius scratched his head and came up with the 64 centimeter long altbratsche, then confused the pundits by building a tenorbratsche at 75 centimeters long. A bitch to play but it made a great sound and was notated in the deep middle tenor clef (as opposed to the not so deep middle alto clef).

Was 75 centimeters the maximum monty?

Almost. The viola pomposa, built at the request of Johann Sebastian himself, staggered in at 76 cm long and 3.8 high.

How the hell you play something like that under your chin?

With will power and leather straps it seems. There was no instruction manual. But with complaints of back ache, deformed shoulders, and arm fatigue from his Leipzig Cantata people (who also had to handle the trumpet, timpani and tenor voice parts every Sunday), JSB went for the more user-friendly violoncello piccolo.

A between your knees job and the rest is history or genetic adaption?

Not really, as experts continued to complain about the viola. Felix Savart (yes, him of the rational trapezoidal viola design) continued the 'too small' argument. Berlioz called for the sound to be more like the guitar and in order to humiliate Paganini, wrote 'Harold in Italy' for viola and over-powering orchestra. The leading French violin maker and builder of the jumbo-sized, 4 meter high octobosse, Jean-Baptiste Vuillaume (1798-1875), came up with the extremely fat and wide contralto.

So that's how all those viola jokes got started and the show's not over till the fat lady chokes? You still haven't managed to explain the tenor violin though.

In 1833, Monsieur Dubois (good name for a luthier) turned out a violon-tenor with body length of 43.5 cm and a total length of 71 cm, tuned it an octave lower than a violin, and played it on his knee in the vertical position.

So better late than never. Is there any last word on the viola, did anyone get it right?

Hermann Ritter (1849-1926) got it too right with the enlargement of the violin's proportions four to three, making an instrument with a body length of 48 cm. According to the big romantic Richard Strauss, the sound was too big and the distinctive nasal tone of the viola had been lost.

Enter Harry Lookofsky stage left, playing tenor violin on his definitive 1958 bebop album 'Stringsville'. A Saxon instrument, the size of a violin with deep ribs, sounding one octave lower than a violin, with Harry soloing like Sonny Rollins.

Enter another Harry - Harry Vatiliotis, the most prolific and extraordinary of Australia's violin makers.

Don't tell me he has started a trend of tenor violin making down under?

Not quite but he has succeeded in making a violin-sized instrument with top and bottom plates that vibrate like crazy when set in motion with strings sounding an octave lower than is normal.

It's an acoustic marvel then?

Something approaching the miraculous, or at least on the edge of what is scientifically possible. And what's more he has been persuaded to add four sympathetic strings through the bridge like a Hardanger fiddle. The bridge splits the sympathetics in the proportion of 2 to 1, so there are 3 octaves of resonating strings. These don't just add a layer of ambiance, these sympathetics get EXCITED, they really go off as loud as the regular bowed strings.

Mmm my ears are starting to water, is it for sale?

No. But you can buy sets of 'octave' violin strings these days, encouraging jazzers and fiddlers to take the tenor option by fitting any regular violin up to sound an octave lower than is legal. The acoustic result is kinda sad but if you amplify the hell out of it - you'll probably still get paid at the end of the gig. 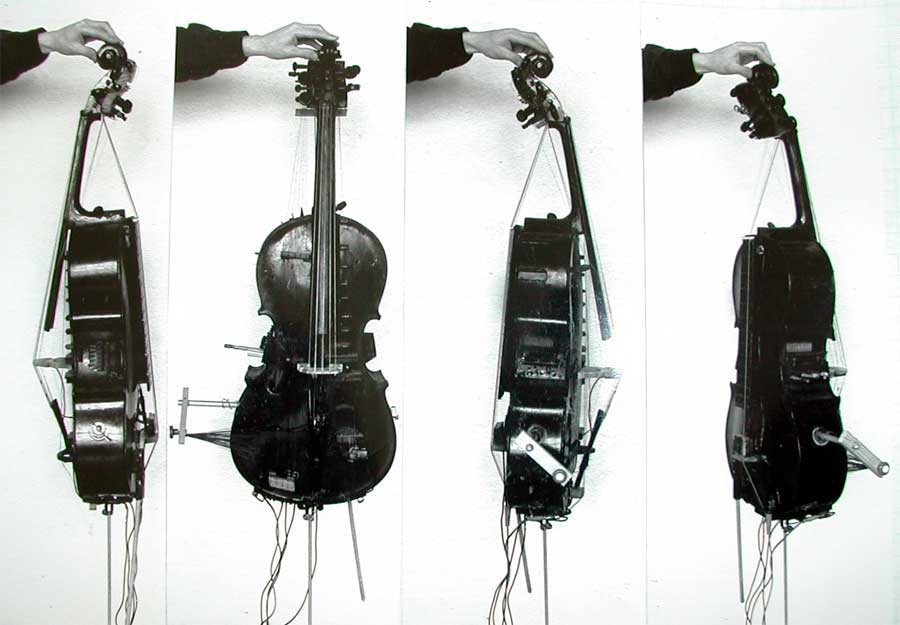 But what ever happened to the Rosenberg 19-String Violoncello, haven't seen it around recently, that was a pint-sized cello with an illegal compliment of strings, if my memory serves me well? Should be in any story about the tenor violin, shouldn't it?

An art couple stole it after a Paris exhibition of The Rosenberg Museum. 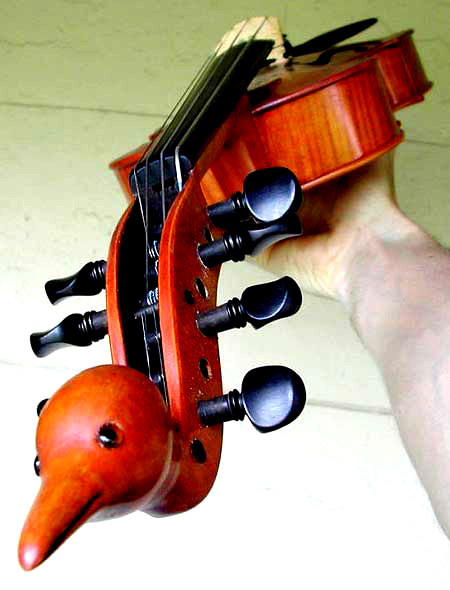 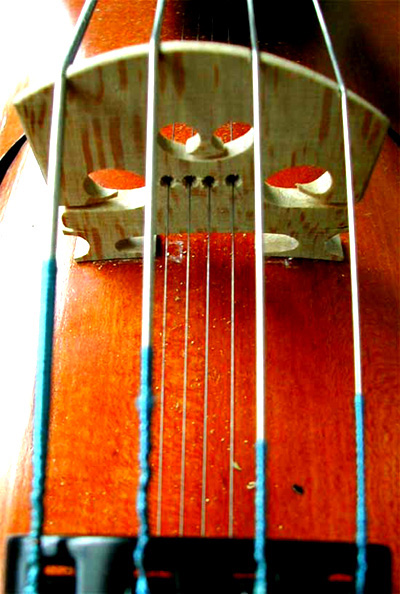 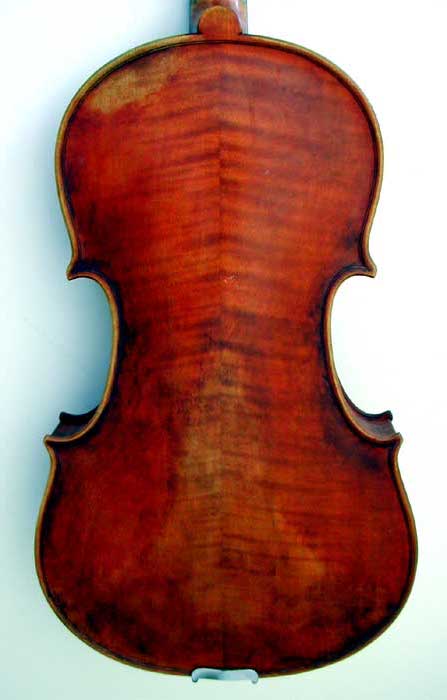 back of Bird and beyond 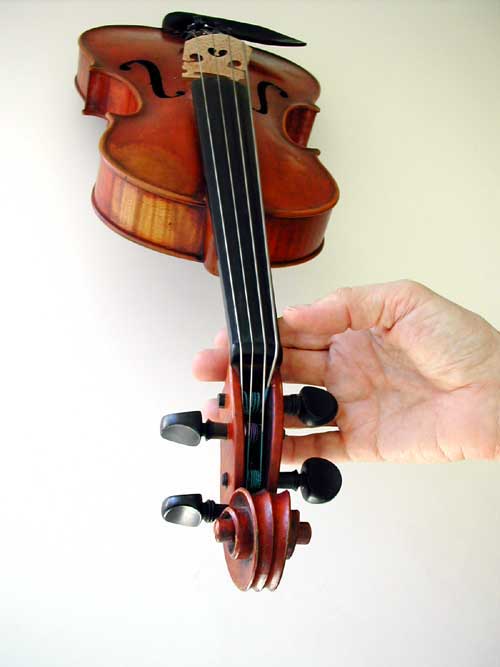 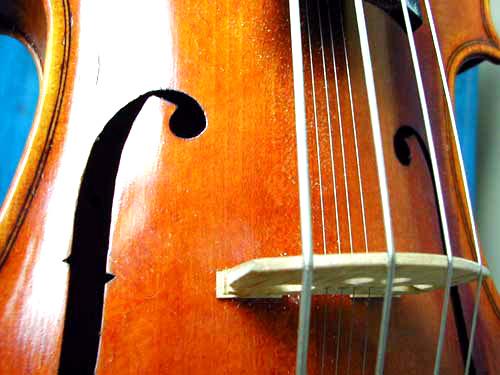 side view of the Bird
website by jos berkers