Turn on/off the embedded sound - The Viocycle undergoing a test ride at the Olympic Velodrome, Sydney 9/1/2004

Pursuitstarted out with the first bicycle experiment - The Viocycle at the Olympic Velodrome, Sydney 2004

more experiments followed with the Pipecycle (a bellows powered instrument) and the proverbial kitchen sink powered by bicycle.

Pursuit 3. The Canberra Pursuit took place on October 18th 2013 at The Fyshwick Depot, Canberra, as part of The Canberra Centenary. It featured a 130 community strong bicycle powered orchestra with a crowd of over 1,000 in attendance. Other videos of Pursuit 3 feature portraits of the bicycle powered instruments, here and here, including the map of the track.

Imagine the darkened spaces of the huge warehouse and car park at The Fyshwick Depot, Canberra. The audience was assembled at various key points around a cycle track. Around them were speeding bicycles with pedal powered sounds; everything from mechanical whirring violins, to beating drums at impossibly fast tempos, to bellow powered organ pipes, to tuned car horns, to DIY electronic instruments, to a colourful selection of bells and buzzers, to chain driven DJ turntables, to a piano (on a bicycle? eh yes),to the aforementioned kitchen sink. Sometimes there was just one acoustic sound accompanied by the discrete lights of the bicyle. Sometimes there was a whole orchestra of bicycle live sounds, digitally manipulated in quadraphonic surround sound, complete with video and light show. Interactive sensors on bike and track determined other sonic and viseral aspects of the spectacle.

With the training and testing session here

Pursuit 2. This event took place on January 9th 2010 at The Princes Warf, Hobart, Tasmania as part of The Mona Foma Festival. It involved over 50 members of the community as bike choir, bicycle bell orchestra, and bicycle instrument makers - an audience of 1,500 attended.

Pursuit 1. Manifesting itself on February 14th 2009 at The Performance Space Sydney and featuring a veritable chamber orchestra of mobile, bicycle-powered acoustic musical instruments combined with the latest wireless transmission technology. About 500 punters attended.

The Carriage Works space became the cycle track - a race of speeding sounds - the sound of bicycles singing. The audience was assembled at various key points around a cycle track. Around them and past them bicycle powered sounds moved physically through spacetime at different speeds. Sometimes there was just one acoustic sound accompanied by the discrete lights of the bicycle. Sometimes the live sounds were digitally manipulated in quadraphonic surround complete with bicycle mounted light show.

Wireless transmission boxes linked instruments and cyclists to a central mixer and quadraphonic sound system, offering more rotational speeds, sounds in contrary motion, and other options such as pitch shift and live sampling techniques to the pedal powered instruments. Close up images of the instrument mechanics appeared on video screens beside the four speakers. Through an integrated MAX/JITTER system, live sound and action transformed the images into a synchronous experience.

Pursuit was a specially-choreographed spectacle of sound, speed and light based on pedal powered generated electricity and lasting one uninterrupted hour. Bicycle musical instruments were anything from simple clip on clickers, a range of bells and horns on the handlebars, to more complex constructions with wheel powered wind, string, or percussion actions - even retro-bicycle dynamo DC powered electronics.

1. The transformation of sound at speed.

2. The rhythms and sonification of the bicycle.

3. The necessity of physical action in the experience of music.

4. The relationship of sport to music.

5. The re-cycling of rust and waste.

My thanks to the key makers in this project, Harry Vatiliotis, Paul Bryant, Robin Fox, Rod Cooper, Wayne Kotzur. 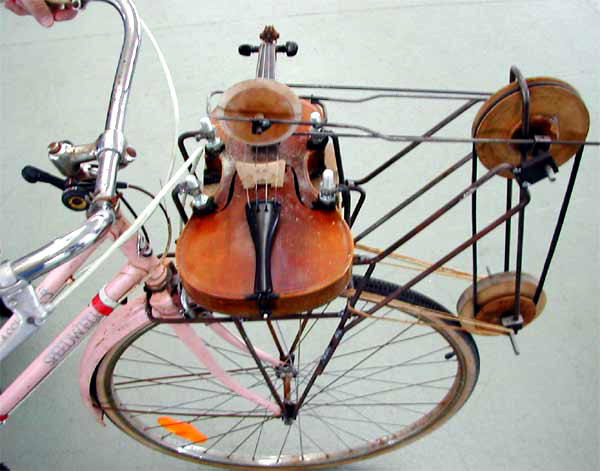 The Viocycle at The Sydney Olympic Velodrome 2004 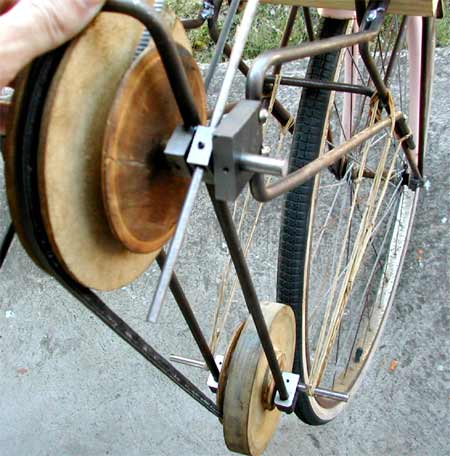 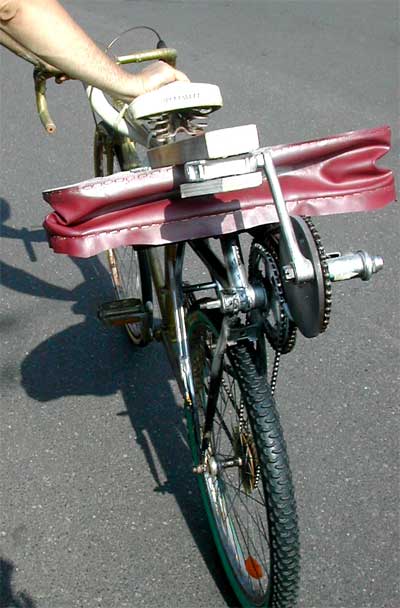 The Pipecycle in a quiet suburban Sydney Street 2004 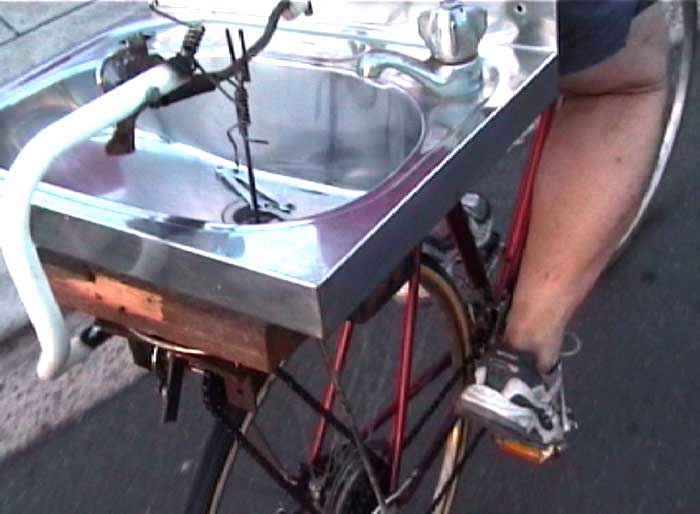