Not quite sure why I went with the 'K' on the front of kultural. It somehow seemed German, or at least at the time I had made up my mind that I was heading to Berlin, centre of kultural otherness, an island refuge for musicians and artists who couldn't stomach being in the Ronald Reagan western.

A number of people have been asking me about the album Kultural Terrorism, this is the story.

The project lasted from 1985 till 1988, and in that period every tour that Eugene Chadbourne and I set out on seemed to be on a new continent. It was primarily a duo, and although a few guest musicians tried their hand at joining us on stage, none (with the exception of Chris Cutler) went the full distance as I remember. We would play two simultaneous solos which, although containing our own personal languages of improvising, also contained as many quotations from popular music as we could cram into a two-set concert. At the end of one concert in a seedy little bar in a forgettable midwest town, a guy came up to us after the concert and handed us a couple of sheets of paper upon which were listed all the songs he had heard us quote that evening, a total of seventy songs (and there was a bunch missing too). He said he felt somewhat elated and confused--elated that he knew so many tunes, confused because we had eradicated almost all support mechanisms. If a tune had the right notes, it would often have another song's harmony. Occasionally two songs from the same source might collide at the same time, the music of Dylan and the Beatles often received this kind of treatment. For many of the concerts we asked for a television on stage to add further ingredients to the already over-spiced cooking pot. If it all became too much, we or the audience could just settle in to the evening news or chat show.

But to be fair to the television, it never let us down coming up with the most bent, juxtaposed commentaries night after night. Eugene actually realised a dream by playing with (if not actually on) a repeat of an old Johnny Carson show. I had my big moment when we hooked up to a particularly dry doco on 'instruments of the orchestra'. On one night in the depths of Southern Germany after the tele show, we were asked if we could do the sound track to a splatter movie or two--kein Problem. Once someone asked us if we could play a song from beginning to end, and eh, properly. We never tried, but I suspect that it might have been beyond us. I can't speak for Eugene, but for myself, I had suspended belief in any and all popular culture. It had been like that for years. This was the time of Michael Jackson and Madonna; just the thought of those two would bring on extreme nausea. On the other hand, bringing out great tunes from the periods of music when there were great tunes seemed to give them a new context; they proved in effect that they were indestructible. Having worked in commercial clubs and everything from restaurants to weddings to C & W bands, I did know a bunch of tunes. Eugene was and still is the ultimate bent cover songster.

And then there was the album.

In a dusty pile of old LPs, I found a copy of Herbert Von Karajan conducting the Berlin Philharmonic Orchestra in Brahms' Fourth Symphony. It was on Deutsche Grammafon, and my reason for selecting it had been inspired by an article in a Sunday newspaper. The article reported that the French horn section of this orchestra had been accused of playing wrong notes on purpose as a demonstration against Karajan's increasingly dictatorial actions against the musicians. A number of issues were presented.

1. It is hard enough to play correct notes of such a recalcitrant instrument; things must be really bad if you want to play wrong notes on purpose. The journalist let his imagination run away with him as to how the orchestra might continue their industrial action. Supposing Herbie gets up and starts conducting Beethoven's Fifth Symphony; the orchestra, however, plays the Fourth instead, or even a combination of the Third, the Seventh and the Ninth at the same time. At this stage, I realised it was beginning to sound a bit like the aesthetics and technique of the Kultural Terrorism project.

2. The notes on the back of the Brahms LP were some of the most sycophantic nonsense I had ever read. They spoke about the orchestra being at one with the maestro, about how the orchestra would do anything necessary to realise the maestro's grand plan. It looked like a good opportunity to put the record straight and paste the newspaper article on the back of the LP cover.

The cult of dictator/genius/conductor reached its zenith with people like Karajan and Bernstein--although an award for over-acting should be given to the orchestra's present conductor Simon Rattle. Significantly, Karajan was an ex-member of the Nazi party and his out-stretched arm, photographed on the front cover of the LP, had that authentic pose.

Anyway, this Karajan album seemed perfect cover and THE cover for our homemade kultural terror action. I got to work with felt tip pen, white out, paper, photocopies, scissors, and glue. In half and hour I had the cover ready. I sent it off to my little Berlin record company, Dossier. They were delighted. By chance an old friend and lawyer of the company's part-time manager dropped in for a chat and happened to see the art work. He suggested that Dossier have nothing to do with this; DG were a touchy lot but if they insisted on releasing it, then a list things had to come out.

The DG name had to be changed, Karajan's face had to be removed ("but you can leave the arms maybe"), the catalogue number removed, the name Karajan removed from all the text, etc. I was busy with the white out and felt tip pen for another session. Days later, the phone went again. Even more had to come out in the text and a disclaimer added. By this stage, it was hard to find any reference to the original DG LP left in the whole messy confused piece of an album cover. I was disappointed, compliance was demanded or no release, and the whole enterprise had become pointless. I felt I had been compromised too much.

A thousand copies of the album were released. Within one week, Deutsche Grammafon had issued a writ against Dossier and were taking them to court. All copies of the album had to be withdrawn. It begs belief that DG would be bothered with such a small-scale enterprise as Dossier, or that they would even know or care about small releases of postmodern music. One imagined some bureaucrat sitting in an office in Munich whose job it was to sort through all record releases of all music worldwide, looking out for anything that may cause offence to Herbie von K or DG itself. Extraordinary. Meanwhile, Dossier was in deep shit. BUT as it happened, DG's lawyer was a personal friend of our Dossier man's lawyer in Berlin. Lawyers drink and eat from the same trough, so an out of court settlement was hastily fixed up. All copies of the offending album known as Kultural Terrorism would be destroyed, and in its place would come a fully legal copy with absolutely nothing on the front cover. It seemed that a headless Herbie was the principle cause of insult and DG's main complaint, so the conductor's arm giving the Hitler salute had to go as well.

The Kultural Terrorism project was an exhausting form of performance counterpoint. After three years and dozens of concerts, we had had enough of it. The appropriation of everyone else's music had become the modus operandi for the new music composer, but from my perspective, when global capitalism took over the whole planet in 1989, dj reality began to outstrip the powers of satire. 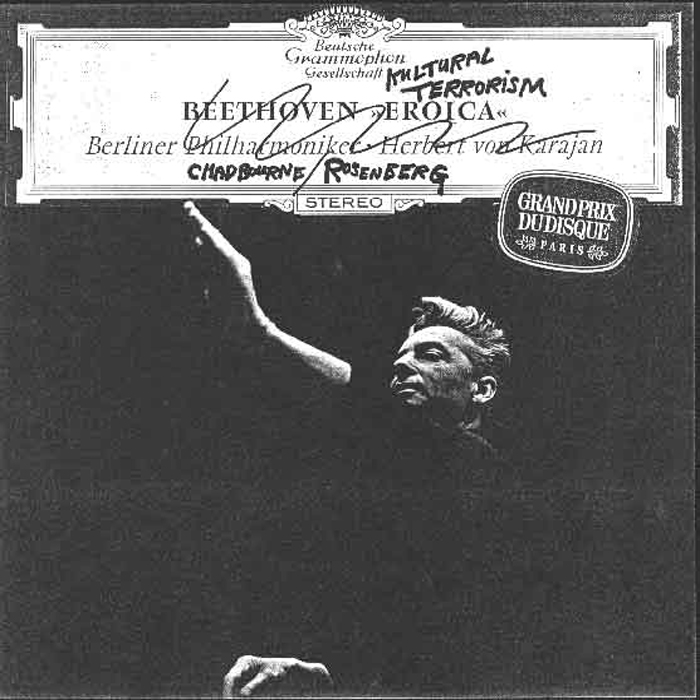 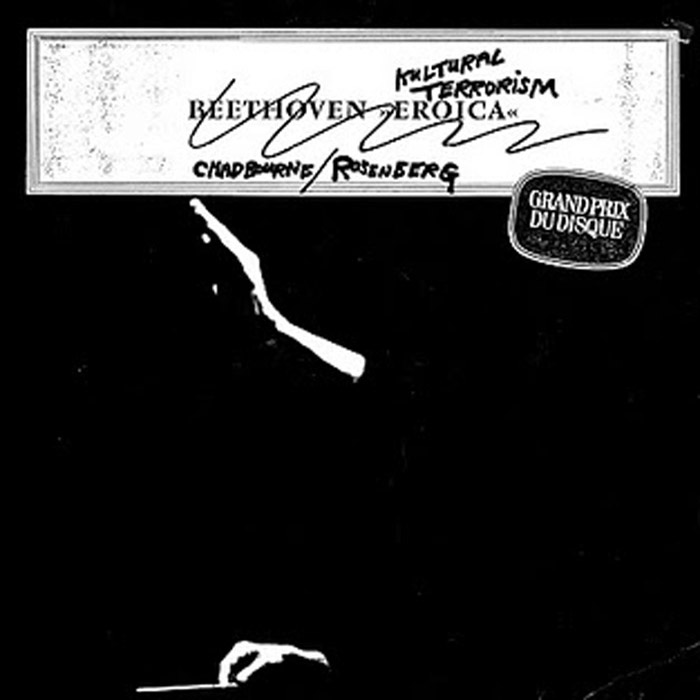 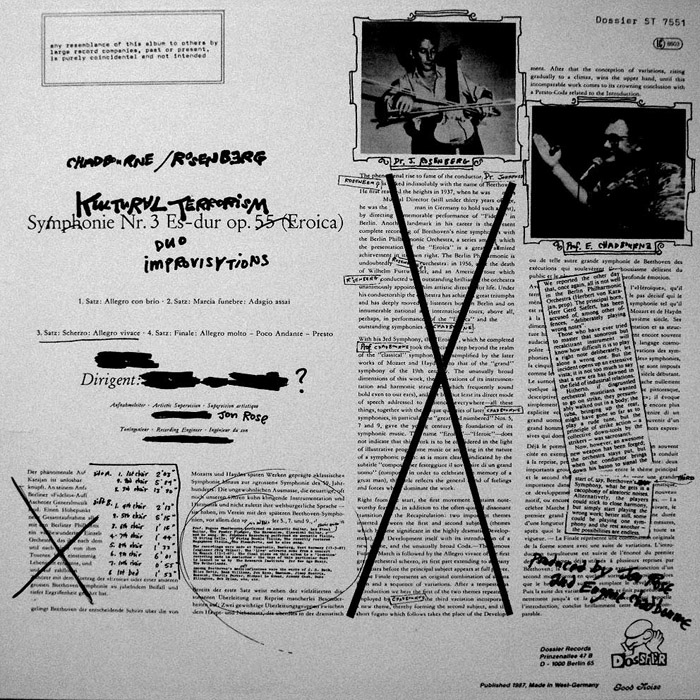 modified back cover of Kutural Terrorism
website by jos berkers