Turn on/off the embedded sound - The sound embedded in this page comes from an Apache violin played by Jon Rose.

When most violinists think of Apaches, they probably still get images of John Wayne fight'n redskins - although the only red skins were the faces of the Anglo Saxon cowboys in the baking hot Arizona sun. Or maybe if they come from the geek generation, they think of the Apache open-sourced programme for web servers. Most western trained musicians have no idea that there is a tradition of Indian fiddle music in both the North and South Americas.

The violin was clearly introduced into South America by Spanish and Portuguese missionaries between the 16th and 18th centuries. To most indigenous tribes, the notion of exchange and fluid appropriation of artefacts was a way of life, so it should come as no surprise that the most popular European (and mobile) instrument of the time should have found its way into cultural practice of many tribes. The violin was soon modified to suit local conditions and ceremonial music. Being mainly interested in monophony, many Indians thought that four strings on a violin was simply - eh, too many strings. The Mayans tolerated only three. The violin has always been adaptive outside of the conservatorium.

In Venezuela, the Warao have lived in extreme isolation for centuries but somehow aquired a violin tradition. In their view the violin has been so long with them that they consider it to be indigenous. You wonder what happened to the God-fearing man that brought them the instrument in the first place. The Warao live in the Orinoco River delta and probably already had a seductive string tradition when the violin turned up. They take the common hollow bough of the Eta tree and string it up with twine made from creepers. With this do-it-yourself idiochord in their ceremonies, they had no trouble fixing up the violin to their requirements.

In Ecuador, the Shuar make their own violins out of one piece of cedar - prized wood in any rainforest case. A zinc strip covers the sound box, and in an homage or a send up of European culture, 'f' holes are cut into the metal. The Shuar do serious hallucinogenic drugs, and the violin drug connects them on a fast track to the spirit world or if the mood takes them, aids them in inflicting spells and illness on their enemies - instrument of the devil and all that.

Quote: The music of the mission towns must not be perceived as an imposition from the missionaries on the indigenous musical practices. This was rather a gradual process of transformation in which talent, preference and creativity on the part of the natives played a major role. Neither was there an attempt to eliminate the indigenous music.

So writes musicologist (and Jesuit) Dr. Piotr Nawrot. Whatever the truth, and anything but cultural empire building is hard to imagine, the Indians of Chiquitos and Moxos in Bolivia ended up playing an enormous repertoire of Baroque church music on violins (and cellos, trombones, spinets, lutes, and harps) - many of the instruments made there in the jungle. The scores penned anonymously in the 1700s are proof of this Catholic endeavour. There is written evidence to show that this was fairly wide spread throughout South America. Left to their own devices, the indigenous musicians may have developed this odyssey into something quite 'other'. However, the Jesuits kept strict control of the process, demanding a Euro copy, and so this Baroque alternative either died out or became a shallow replica of its former self.

Meanwhile, back in Arizona the Apache violin had been going for no-one-knows-how-long-but-a-long-time. I'm sitting here in Sydney, Australia with an Apache violin on my table. Let me describe it to you:

The instrument is 58 centimetres long and 12 cms wide at its broadest point. The tuning peg goes right through the body; two small bridges support the one string. The instrument in decorated with two red birds, two yellow suns, and eight serif shapes in blue, yellow and white. A feather is attached to the tuning peg. The bow is rudimentary, functional. It's made from a sumac branch.

Some ethnomusicologists reckon that the Apaches just copied the European violin - eh, it doesn't look like a copy to me. The Apaches call it Tsii'edo'a'tl - 'the wood that sings' and say it's been in ceremonial use since before the red-faced white men arrived on their land. Certainly the very appearance of an Apache violin is closer to ancient Mongolian string instruments than anything European.

The violin is used in healing rituals, and it is known that the famous Apache leader Geronimo made and played the violin before John Wayne tried to kill him. The instrument is made from a century plant stalk. It must have already 'dried to a reddish skin colour' (I didn't write that) and be free from insect damage. The bark is removed, as is the pithy inside; balsa wood plugs are inserted into each end of the century plant 'tube'. Within the curve of the century stalk lies the best place for the string - earlier some desert twine, these days normally a commercial violin string. The instrument is coated with resin (or a modern equivalent).

On picking up this violin, you are aware just how fragile the instrument is - so light, you could easily crush it in your hand.

My colleague and partner Hollis Taylor brought this violin to Australia; it's probably the only one in the country. It was made by Chesley Goseyn Wilson who is the great-great grandson of the Chiricahua Apache Chief Cochise. 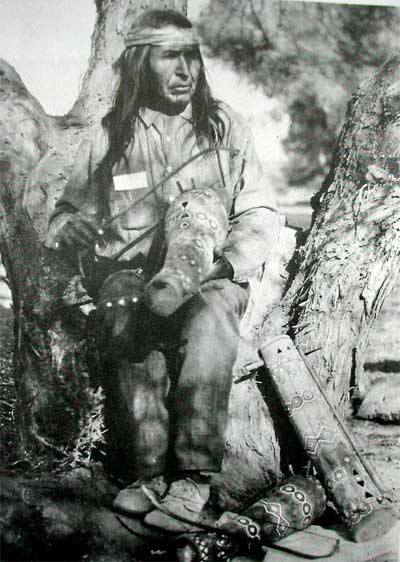 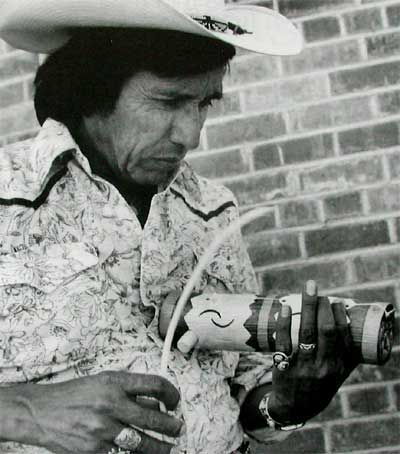 Chesley Goseyun Wilson with the violin in the correct playing position 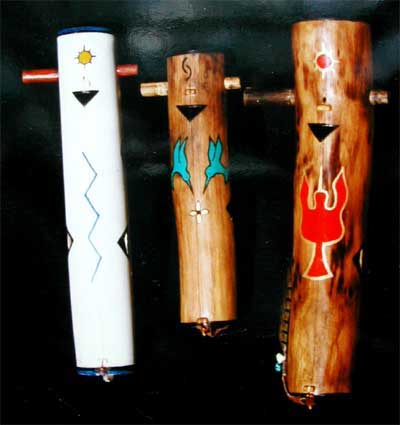 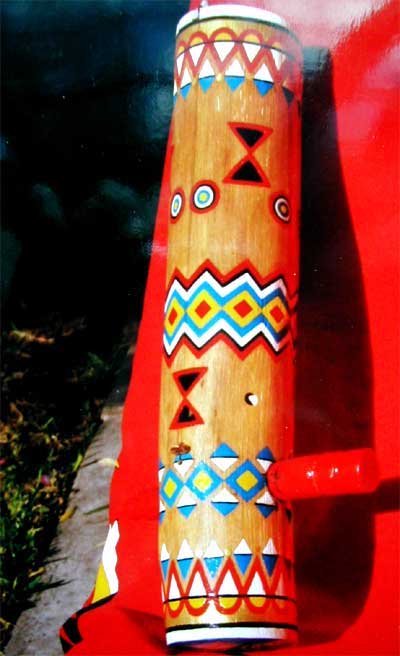 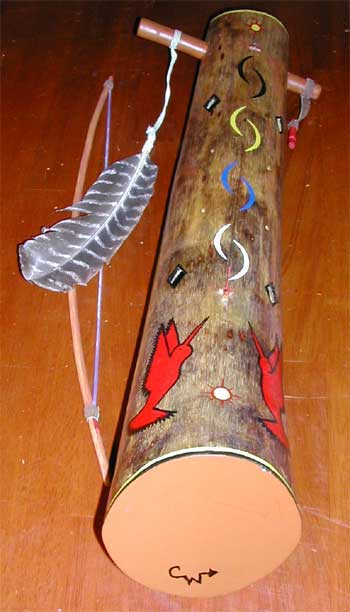 the Chesley Goseyun violin on my work table 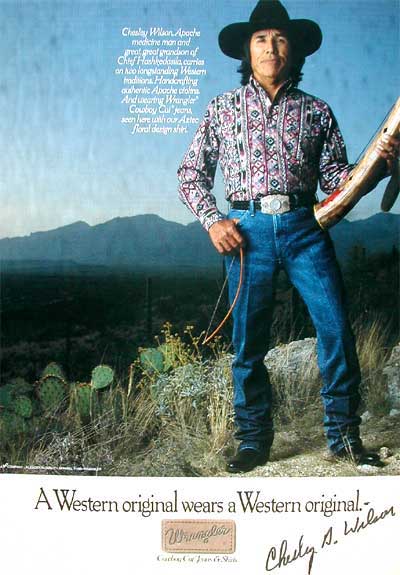